(2) Any person of the Qaudiani group or Lahori group (who call themselves “Ahmadis” or by any other name) who by words, either spoken or written, or by visible representation refers to the mode or form of call to prayers followed by his faith as “Azan”, or recites Azan as used by the Muslims, shall be punished with imprisonment of either description for a term which may extend to three years, and shall also be liable to fine.

Any person of the Qadiani group or Lahori Group (who call themselves ‘Ahmadis’ or by any other name) who, directly or indirectly, poses himself as Muslim, or calls, or refers to, his faith as Islam, or preaches or propagates his faith, or invites others to accepts his faith, by words, either spoken or written, or by visible representations, or in any manner whatsoever outrages the religious feelings of Muslims, shall be punished with either description for a term which may extend to three years and shall also be liable to fine.

The Blasphemy Laws, specifically Sections 295-A, B and C of the Pakistan Penal Code, remain a key area of concern. These legal provisions, which criminalise insults against Islam, are problematic for a number of reasons, particularly as they are misused often to settle personal scores. Their imprecision creates problems, particularly for minorities, as the definition of blasphemy is vague and doesn’t deal with questions of intention.

Also, the standard of proof required is low, further leaving it open to abuse. Religious clerics use the Blasphemy Laws to encourage their supporters to take the law into their own hands and endorse the murder of minorities in the name of religion.

Ahmadis continue to face false blasphemy accusations. By way of example, on 20 November 2015, there was an arson attack on an Ahmadi factory in Jhelum which resulted in substantial destruction of the factory. This attack was justified by the mob, many of whom worked in the factory, on the basis that the Ahmadi owners and an Ahmadi staff member had blasphemed.

These laws continue to be supported at the highest level. In March 2017, Prime Minister Nawaz Sharif wrote, on his party’s official Twitter account, that blasphemy was an “unpardonable offense.” He issued an order for the removal of blasphemous content online and said that anyone who posted it should face “strict punishment under the law”. Ahmadis cannot defend themselves against charges of blasphemy without committing blasphemy and placing themselves in acute legal, physical and social jeopardy. An individual we interviewed (KK) said, “We are legal enemies of the state and cannot expect protection from the state.” Ahmadis who voice opposition to legislation, making their religion a crime, are considered “traitors.” Accusations against the Ahmadis are not refuted. These stand as “facts” that become enlarged and embellished in public discourse, with no rebuttal to temper exaggerated and ruthlessly perpetuated rumors. “No one dares discuss repealing the Second Amendment anything disliked, is blasphemy”.

This is punishable by three years imprisonment and a fine. If the offence is regarded as blasphemy then an Ahmadi could be sentenced to death.

It is a criminal offence for Ahmadis to:

Refer to their faith as Islam

Call their place of worship a ‘Mosque’

Make the call for prayers (Azan)

Say the Islamic greeting ‘Assalamo Alaikum’ (Peace be on you)

Preach or propagate their faith

Ahmadis are effectively denied the right to vote and they are disfranchised unless they declare themselves as non-Muslims. They remain the only disfranchised group in Pakistan. Indeed, the Electoral Commission of Pakistan has further institutionalized the disenfranchisement. It has decided that Ahmadis can be permitted to vote only under a separate register and by self-identifying as a non-Muslim minority, denying their faith.

While Ahmadis are registered on a separate electoral register, all other communities—whether Muslim, Sikh, Hindu or Christian—are listed on a unified joint register. The requirement of Ahmadis to deny their faith in order to vote has caused their disenfranchisement from Pakistani politics for more than 30 years. Worse still, the separate Ahmadiyya electoral register is publicly available, making it much easier for extremists to target Ahmadis. 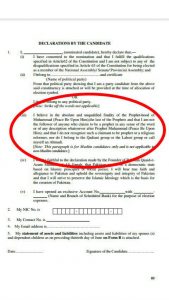